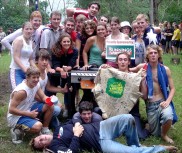 Roventure 2005 on February 25 to 27 saw close to 200 Rovers and Venturers from across Sydney North combine in an attempt to have as much fun as possible in one short weekend!

Luxury campsites sprouted on the banks of the Colo River and the scene was set for some inter-team competitiveness that was both aggressive and good natured! Roventure is always a fantastic event for both Venturer and Rover sections, as it provides the opportunity to get to know each other better. It was particularly great to see lots of Venturers from Units who had never been on a camp like this before, all getting out there, making new friends and having a fun time. Participants could choose to participate in activities, catch up with old and new acquaintances or catch some extra zzzzs river-side.

Everything about Roventure this year fitted the theme of “Aussie Legends” – the humidity, the clothes, the competition and the bad singing. The Colo River provided a suitable escape from the heat and everyone got stuck into the round-robin activities including backyard cricket ball retrieval, filling the bush shower, photo scavenger hunts, writing hakas, creative can-stacking (one team built a replica Gold Coast casino), the quest to refuel a dying Commodore and two different kinds of boat races.

Saturday afternoon saw the combined Venturer and Rover teams take on an obstacle course, that had the participants swimming, running, crawling, leaping and much more. The rest of the crowd either cheered competitors on or made the most of the tree branches conveniently overhanging the river.

Stomachs were not neglected, with impressive spit roast feasts put on by a number of Crews – great preparation for Sunday morning’s stomach-wrenching “iron gut” event!

Enthused by the possibility of winning a new BBQ, we all eagerly challenged each other in the highlight of the camp – Saturday night’s Aussie trivia quiz and Karaoke. The sound of 20 odd Venturers and a sprinkling of Rovers belting out a rendition of Cold Chisel’s “Khe San” was unforgettable! An “Aussie Legends Fashion Parade” kept the night lively with the likes of the typically Aussie bloke to a Torana to a Peter Garrett dance impersonator. Unfortunately we just couldn’t compete with the talents, both intellectual and aesthetic, of Epping’s team but we all had a lot of fun trying!

10/10 to the organisers, 1st Brush Park Rovers and Venturers for an awesome 2005 Roventure! The campsite was pretty impressive, with good facilities, a really good layout for the activities and a great river for swimming plus a pretty impressive rope swing. In fact the camp in general was just brilliant.

– “Extremely enjoyable, great watermelon helmets, great people, one of the best Scouting camps I have been on.”
Julia Offner, Mona Vale Venturers

– “It was a really good camp, had lots of fun as usual. Roventure brings the Rovers and Venturers closer together and makes it easier when making the transfer from one to the other. Can’t wait for next year’s!”
Chris Best, Mona Vale Rovers

– “It was pretty good, different from last year. We had a lot more Venturers and were a tighter unit. Had more fun coz we tried to win!”
Ben Ferguson, Mona Vale Venturers

It was a bright summer morning in the Mona Vale camp on the first day of Roventure 2005. Everyone was nicely awoken by Benny running around the site in his boxers spreading the morning cheer, at 6.00am mind you! But a morning of feasting and craft was ahead to put the final touches on our die-hard cricket fan costumes, the watermelon helmets. With a large contingent in tow, the Mona massive proceeded to opening parade in full riot gear, then on to a weekend of chants and skylarking, only to be embarrassed when the roar from Mona Vale was drowned out by the true force which is the horde from Forest. Saying they disliked us because of our location or something.

The activities were top shelf, pitting brain, brawn and craft skills to create events which all could get involved in and enjoy. Bringing us to the trivia night which was well run even though Mona Vale was not provided with an answer sheet – as you can guess we did not do the best. Did I see Elmo or was there something in the water, I don’t know. Looking at the board again to check the score the battle for first place had begun with Gordon and Mona Vale neck and neck, which would become skirmish of wits, determination and skill for both parties to the end.

After closing our eyes on Sunday morning to open them 2 hours later, the next day had begun. With a quick dip in the river and a desperately needed cup of English breakfast tea we were ready for the day ahead. A vigorous obstacle course was set to test our skill and energy level from the party the night before. In the fierce battle for supremacy, I had lost my pants four times in the labyrinth – not the right attire for the day’s play. The day ended with the Tug-of-War, pitting Gordon against Mona Vale for front line honors and the privilege to run the next Roventure….. and the people of Mona Vale were duly rewarded.

I would like to thank the outstanding Brush Park for putting on such a splendid shindig and also all that attended, making Roventure the success it was. Thank you again.